The Greater Haverhill Chamber of Commerce is pleased to announce the winner of the 2016 Charles E. Billups Award, the highest honor bestowed by the Chamber. The award will be presented to Sally Cerasuolo-O’Rorke of Golf Leaf Fine Jewelry. 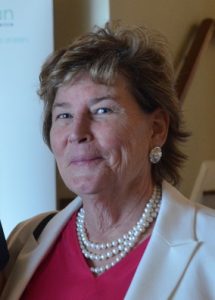 Sally will be honored for years of leadership and commitment to the Greater Haverhill Chamber, as well as an ongoing and impactful contribution to the economic development of Haverhill. Through her work on the W.O.W. Conference, an annual woman focused conference that was her brainchild (celebrating 20 years in 2016), as well as her continued efforts to maintain relationships with Greater Haverhill Foundation and the Chamber, Sally has brought a positive and lasting influence to the business community. We congratulate her for these efforts and proudly recognize her with this great honor.

Sally will be honored at the 2016 Annual Dinner & Awards Ceremony on Thursday, June 2, 2016 at 6:00 P.M. at Renaissance Golf Club. Reservation may be made by contacting the Chamber office at (978) 373-5663. Additional information may be found at www.haverhillchamber.com.

Once again we congratulate Sally Cerasuolo-O’Rorke on her accomplishments.

Sally is the founder and president of Gold Leaf Fine Jewelry, Inc. which she established 30 years ago out of her home. Within 10 years, the business outgrew that space and she moved the company to its current location at 800 Broadway in Haverhill. In 1998, while still operating Gold Leaf, she was named president and CEO of the Greater Haverhill Chamber of Commerce. She was initially appointed to a one-year contract to stabilize the organization, but continued in the position until 2007.

During her tenure with the Haverhill Chamber, she chaired “The Great Race”; increased membership from 400 to 800; created Leadership Merrimack Valley in partnership with NECC; co-founded Team Haverhill, a community based organization designed to grow and promote the city of Haverhill; and founded Winning Opportunities for Women (WOW) which has grown year after year into the Merrimack Valley’s premier leadership conference for professional women. Cerasuolo-O’Rorke is also credited with convincing the Greater Haverhill Foundation to buy the former F.W. Woolworth’s department store, resulting in the redevelopment of seven key parcels in downtown Haverhill for “Harbor Place” – a $60 million development.

About the Charles E. Billups Award

The Charles E. Billups Award was established in 1985 to recognize an outstanding organization or individual in our service area that continuously and selflessly supports the efforts of the Greater Haverhill Chamber of Commerce. This annual award is presented to an organization or individual that has made a positive impact on the success of the Chamber of Commerce, going above and beyond in their participation, leadership and overall support of the mission.