All In The Family – as published in Golf Business

Atkinson Resort & Country Club Owner, Christine Lewis Morse was recently featured in a cover story in “Golf Business'” January issue. The story, written by Trent Bouts paints the perfect picture of this renowned golf course and facility. The beginning of the article is re-printed here. 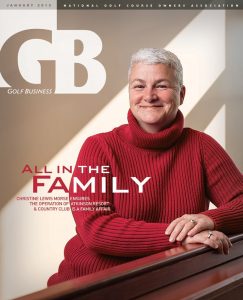 As a 10-year-old, Christine Lewis Morse rode shotgun with her grandmother collecting rent checks and delivering the occasional eviction notice. At age 18, she drove 10-wheel dump trucks hauling dirt to and from construction sites. In her mid-20s, she was put in charge of several lumberyards during a recession. She shut down two and downsized a third. What was a $3 million operation at the time does $28 million now. In Atkinson, New Hampshire, something of an anomaly. Lewis Morse doesn’t play golf, but she’s doing something right. Atkinson Resort, with some 250 full-time, part-time and seasonal employees at its busiest, generated more than $8 Million in revenues last year.

The resort was also named 2015 Golf Course of the Year by the New England Golf Course Owners Association. Not bad for someone whose only previous hospitality experience was a bumpy stint with Dunkin Donuts after quitting school early in the 11th grade. “I didn’t do well with the customer relations side,” Lewis Morse confides. Perhaps not too surprisingly, she went back into the family business fold. Such a past amounts to a MBA, if not from the school of hard knocks, then at least from the school of the real world. But to think that’s the only acumen Lewis Morse commands would be to miss a less obvious but no less critical element of what is clearly a successful management style. For all the emphasis she places on her businesses, she’s equally vested in the well-being of the people who work in them. Politicians frequently champion family values around election time, but Lewis Morse simply values family day in and day out. “Our employees are extended family,” she says. “We have people working for us who have been with us for 40 years. We have several generations of families working for us. We take care of our own.”

When her head golf professional mentioned his kids were about to start T-ball and that he might look to sneak out and watch them now and then, she told him to mark off two days a week so he could coach, not just watch. “These are going to be some of the best days of your life, go do it,” she told him.

Lewis Morse’s long-term vision for Atkinson Resort—420 acres in all—is an extension of… to read the full story as printed in Golf Business click here.