W.O.W. To Highlight Women at Pinnacle of Career

20 years of Winning Opportunities for Women
~Succeed Like A Girl~ 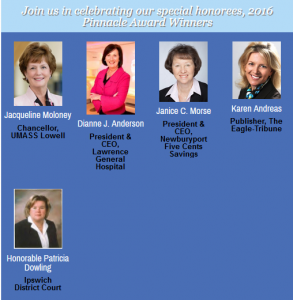 On Friday, April 15, 2016, the Greater Haverhill Chamber of Commerce, Celebrating 20 years of Winning Opportunities for Women (W.O.W.,) Conference is pleased to announce the addition of a special recognition ceremony to highlight professional women who have reached the “Pinnacle” of their career.

Each of our honorees has worked hard, proven themselves in their respective industries and risen up the ranks to achieve success. Recognizing them for their achievements is an effort to further empower the professional women in attendance, as much as applauding the women being admired.

This portion of the event, scheduled for the lunch hour, will be an opportunity for professional women from across the region to come together sparking stories of success and sharing leadership strategies, career empowerment tips, professional development ideas and relationship building.

More About The Honorees –

Ms. Dianne J. Anderson, RN, MS serves as Chief Executive Officer and President of Lawrence General Hospital Inc. Since 2009 she has led Lawrence General Hospital’s successful strategic initiatives to transform the community hospital into a Regional Health System. Her career in healthcare began as a Registered Nurse specializing in Pediatrics. She spent several years in clinical practice at both Tuft’s Floating Hospital and Boston Children’s Hospital and quickly moved into management positions.  Dianne moved into leadership and administrative type roles spending time both in Scotland and the Northeast Region of the US developing her management style. She was recruited to Beth Israel Medical Center as VP of Nursing and Patient Care in 2001. There she was part of the turnaround team that brought the prestigious Medical Center back to financial health.  She was promoted to Senior VP of Clinical Operations, the position she served in until appointed as CEO of Lawrence General Hospital.  Dianne serves on a variety of state and national committees.  She serves on the Board of Directors of the Massachusetts Hospital Association (MHA).

Jacqueline Moloney is a national leader in innovation in higher education – was appointed chancellor of UMass Lowell on Aug. 3, 2015. She is the third chancellor of UMass Lowell. Jacquie Moloney is the first woman to serve as chancellor of UMass Lowell in the 121-year history of the institution. Moloney had been executive vice chancellor since 2007, selected by former chancellor Marty Meehan to lead his executive team. Moloney is a pioneer and innovator in higher education who has advanced how UMass Lowell and, through work on behalf of organizations such as the Sloan Foundation, institutions across the country deliver coursework and support services to students in order to enrich their academic and extracurricular experience, both inside and outside the classroom. As a professor of curriculum and instruction in the university’s Graduate School of Education, her research has included the development of online programs, the use of technology in the classroom, higher-education organization and cross-disciplinary curriculum reform. She is an active scholar who has published extensively in peer-reviewed academic journals and is a sought-after keynote speaker at national conferences. As a principal investigator, she has secured more than $850,000 in foundation grants to fund innovation in faculty and curriculum development.

Karen Andreas serves as Regional Publisher of Newspapers, Websites & Magazines – Massachusetts and New Hampshire of Community Newspaper Holdings, Inc. Ms. Andreas leads The Eagle-Tribune throughout the region, two Massachusetts weeklies, the Andover Townsman and Haverhill Gazette, as well as the Derry News and Carriage Towne News in New Hampshire. Ms. Andreas served as Vice President of News of Eagle-Tribune Publishing Company, is a subsidiary of Community Newspaper Holdings, Inc. Ms. Andreas served as an Executive Editor of Eagle-Tribune Publishing Company. She worked at North Shore newspapers for 17 years, including three as Salem News editor. She oversaw four daily and several weekly newspapers, including the Eagle-Tribune, The Salem News, the Daily News of Newburyport, and the Gloucester Daily Times. Ms. Andreas has been in the newspaper business for nearly 20 years, focusing on community journalism. Ms. Andreas was honored with numerous awards, including the most recent national recognition for The Salem News’ 2005 series on “Opiates in Our Towns,” and OxyContin. Ms. Andreas received numerous honors during her 25-year newspaper career and has the prestigious Judith Brown Award from the New England Society of Newspaper Editors, recognizing the work and pioneering drive of an outstanding woman in journalism from the six-state region. She is a graduate of the University of New Hampshire.

To register or receive more information on table and student rates, please visit www.haverhillchamber.com or contact Melissa Seavey at 978-373-5663 or melissa@haverhillchamber.com. Sponsorship packages are available, and vendor inquiries are welcome