James Ovid Mustin III’s “#5” is exhibited at NECC’s ArtSpace as part of the “30 Years of Printmaking” Exhibit featuring artists affiliated with the Center Street Studio in Milton.

Northern Essex Community College’s ArtSpace Gallery is featuring an exhibit titled “30 Years of Printmaking” by artists affiliated with the Center Street Studio in Milton, now through March 1.  The public is invited to attend a reception on Wednesday, February 18 from 3:30 to 5:30 p.m.  The gallery is located in the Harold Bentley Library on the college’s Haverhill Campus, 100 Elliott St., Haverhill, MA.

After completing his Master of Fine Arts in Painting and Printmaking at Yale, James Stroud established the Center Street Studio in 1984 to create a collaborative environment for artists to make prints. Over the past 30 years, Center Street Studio has earned a reputation as a world-class printmaking workshop, and Stroud has worked with both established and emerging artists. 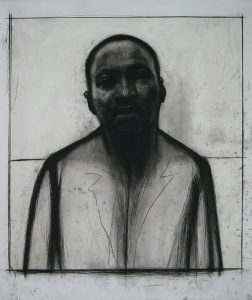 John Wilson’s “Martin Luther King Jr.” etching is displayed in the ArtSpace as part of the “30 Years of Printmaking” Exhibit featuring artists affiliated with the Center Street Studio in Milton.

NECC offers an associate degree in general studies: art which provides a two-year degree with a focus on specific area of the arts, such as fine arts, multi-media, photography, or visual communications. Gallery hours are Monday through Thursday 2 p.m. to 9 p.m., Friday, 2 p.m. to 5 p.m., Saturday, 9 a.m. to 1 p.m.