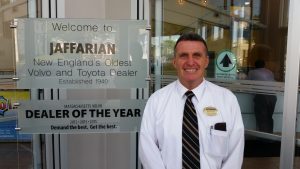 Jaffarian Volvo Toyota Scion, a full service, award-winning family owned dealership with a 4.9 out of 5.0 DealerRater.com ranking, today announced that Mark Witham has joined the dealership’s premier team of salespeople.

Witham, who grew up in Haverhill and recently moved back to the area after living in Florida for 25 years, is bringing his more than 30 years of experience in the automotive industry to Jaffarian. Over the course of his career, Witham has held a variety of sales, sales management and finance positions at dealerships both here in Massachusetts, as well as in Florida.

“I’m thrilled to have Mark join the Jaffarian team,” said Gary Jaffarian, president and CEO, Jaffarian Volvo Toyota Scion. “Mark is not only a highly experienced and professional salesperson, but he’s also a terrific Haverhill born and bred guy whom I’ve known since we were kids. We’re happy to have him back in his hometown and even more excited that he’s now part of the Jaffarian family.”

Born in Haverhill, MA, Witham graduated Haverhill High School in 1973 and played on a number of local sports teams including the YMCA junior league football team. He is a former boxer who holds the New England Golden Glove Championship title from 1977. Witham is an avid Patriots and Red Sox fan and is thrilled to be back in the state to root on his favorite teams.

“I’m so happy to be back in my hometown and part of the Jaffarian team,” said Witham. “I had told Gary that when I decided to move back from Florida, Jaffarian would be my first choice in terms of places to work. It’s a terrific dealership, selling top quality vehicles. I have known the Jaffarians all my life and working here is like coming home.”