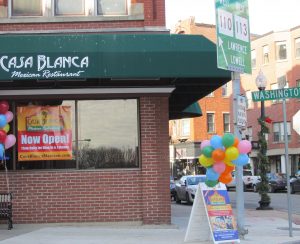 The Greater Haverhill Chamber of Commerce is delighted to award Casa Blanca Mexican Restaurant with the January 2016 Business of the Month distinction. This special recognition serves to highlight their outstanding support of the local community, consistent participation in community based events, willingness to host business, fundraising and social events and their strong commitment to providing authentic Mexican food to the people of Haverhill, Massachusetts.

Casa Blanca Mexican Restaurant is a locally owned and run family business. With four locations now populating the Merrimack Valley, and riding the waves of a good reputation and amazing authentic Mexican dishes, the restaurant expanded into Haverhill late in 2014. The restaurant is the third for the Vargas family who also helped to establish the “sister concept” for the brand, which was opened under the same name in North Billerica in 2009. This location is owned by the Cervantes family, who are not only close friends of the Vargas family but are also from the same region of Mexico.

The foundation for the Casa Blanca brand is built on the traditional Mexican values for hospitality and family. It is the mission of both families to immerse their guests in Mexican culture from the moment they walk in the door, by making every person feel at home and a part of the family.

In an effort to recognize outstanding achievement in the Greater Haverhill community, the Greater Haverhill Chamber of Commerce formally identifies a “Business of the Month” approximately every four weeks. This award is given to a Chamber member that is a proven leader in their business or industry and excels in the areas of community involvement, economic growth, customer service and professional relationships.

Award winners are recognized in area newspapers highlighting their distinction as Business of the Month, receive a complimentary guest ticket to the Greater Haverhill Chamber of Commerce’s exclusive “Annual Business Awards Breakfast” and are automatically entered into the running for the Annual

Business of the Year award. That honor is announced during the annual breakfast which has been scheduled for February 3, 2017.

Nominations for Business of the Month can be submitted at any time. Forms are available by calling the chamber office at 978-373-5663 or by email at info@haverhillchamber.com. There is no fee for nominations or applications. Companies may be nominated by any member business. This is a benefit available exclusively to Chamber members.